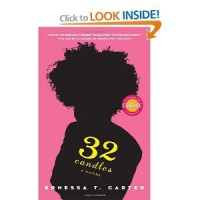 I'm no fan of John Hughes movies, never really was, but I can also understand the fairy tale endings and romantic appeal in a big way. And Davidia Jones just thinks she deserves her Molly Ringwald ending. 16 Candles is her favorite movie, and her movies are essential for her. She quickly finds her Jake Ryan in James, a new boy at school who is as sweet as he is beautiful.

This book had far more layers than that (this review won't even scratch the surface), though, from concepts of beauty in an all-black town , self-loathing, abuse, and class divides, finally to choosing your own family and making your own way against all odds. It even features easy-to-fall-into relationships that are, at their core, complacent, and how to heal and move on with someone you care deeply about. (This is one book where centralizing the story on Davie, as she's later known, and her relationships wasn't distracting--it was just her book) The beginning of this book is not gentle, much in the same way her idol's life is at the beginning of 16 candles, Davidia's is in shambles. Far worse off than Sam, though, Davidia chooses not to speak due to prior trauma with her abusive mother. James is extraordinarily warm and kind but Davie's life are quickly set about a different path through necessity, heartbreak, and desperation.

But we don't see all of the 16 years between 15-31 as clearly--and warning here--Davie edits for us too. We learn that Davie has made some terrible, awful, hurtful choices herself. I wondered if I would ever come around on her again.

I need to mention though, because I see others reviews say this isn't romance, I believe it is at its core. James eventual pursuit of Davie is clearly entitled, won't take no for an answer (see where he reminds me of Hardy Cates), but in a much less threatening way. However, this bit is a pretty big hang up for me--it was a little too persistent for me to love their courtship at the beginning. The meat of that romance is where this wonderfully grounded novel shine, along with its humor and sneaky social observations. I also have to say another highlight is the end, where we begin to see Davie as a protagonist making her own way and dealing with her choices-maybe in a miraculous way, but I love good endings.

There's an awful lot of growth. James isn't as fully fleshed as he is 'perfect' but the surrounding secondary characters with all their flaws, love, mistakes, loyalty, along with Davie's absolutely stunning journey more than make up for it.

I do warn, if it's not clear, this book isn't always easy to stomach. It didn't have me weeping, but it is certainly not fluff. It is a novel that is centrally about redemption, surviving,thriving in hostile environments through loyalty, luck, and love-and yep that romance too.