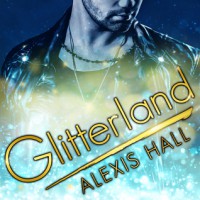 Copying my review over from the print version. No idea why this weird occurred:
I love glitter. I wonder if people who don't like a little sparkle are lying. But then, the practical side of me says "Hey it really sticks to you and is heavily irritating, you find it all over forever. It never lets you forget you had it on your new year's cards that one year" And well, I must say there's no more fitting term for one of the heroes of this book than Darian, the Glitter Pirate.

That's not to take anything away from Ash's narrative, because it was so painful and dead on, and that might actually make you feel like you're about to get hit by a bus every so often in this book. Ash's self-defeating manner was so easy to slip into that sometimes it felt like a second skin in this book. There were incredible painful moments, but my god it's so lovely, vivid and made me smile more than hurt.

I can't really say much else about this book other than I really did feel like it was damn near perfect.

What can I say about the audiobook? Nicholas Boulton treats us to both characters in a recipe at the end....He's incredible, they were both so very alive and real and I can't help thinking his narration added a layer my brain never could to the characters. In other words, also perfect.